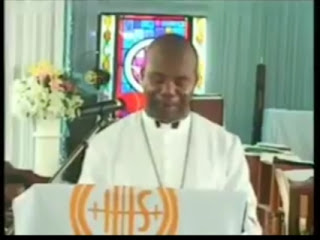 https://youtu.be/NYguEHw05OU
Video has emerged where late Father Offu criticized Fulani herdsmen and those supplying them AK47 guns.He also stylishly criticised President Buhari in the video.
Many social media users are linking his killing to the criticism.
Sahara Reporters few days ago reported that Less than 25 minutes after Catholic Priest, Rev Fr. Paul Offu, was shot dead, his bank account was emptied by a yet-to-be-identified person.


According to SR,the suspect made repeated withdrawals until the account was emptied, according to a reliable source working in an old generation bank (name withheld) where the late clergyman had an account.


The inside source told Daily Trust, “It makes one wonder how fast the killers (assuming they actually made the withdrawal) were able to rush to the bank and withdrew all the cash. Who was, indeed, responsible for disclosing the pin number of the priest?”


The source said further, “There is the need for the security operatives to look inward and ascertain who actually made the withdrawals from the murdered priest's bank account shortly after he was killed.”