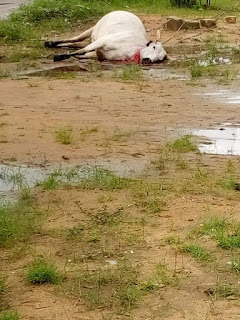 According to a report shared in Pidgin by Sapele Oghenek,a Fulani man lost his cow in Delta State due to electric shock.The cow stepped on a wire that was on the ground.Below is the story in Pidgin...
'Report reach us for studio say na BEDC electric wire nai kill one fat namanama cow for MTN Road close to Merit International School. According to reports, dem say the wire cut around 11:00 O'clock this morning wey rain dey fall. As the rain fall finish nai the cows dem dey pass, nai one of the nama con march the wire, na the electric nai kill am on the spot. The Fulani boy con cut the neck, make blood for commot. Na later nai BEDC switch off the lines. Na two wires cut from up. With this development, we dey warm pipo wey build stores under BEDC wire along the MTN Road especially that new store for the next compound after where this thing for happen so, and other roads for Sapele say make this serve as warning to dem. We thank God say e nor pass so. No life was loss, as na only cow nai kpuff. Na the pictures dey attached to this update so' 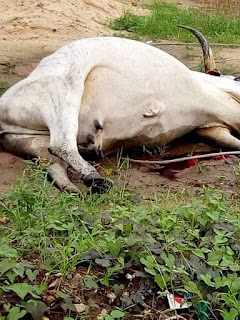 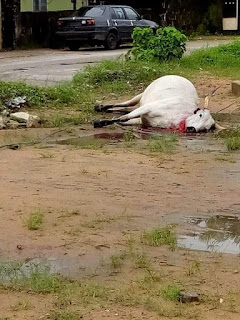