'Shoot! Shoot! Shoot!':DSS Leader Gives Order To Others At Trial Of Sowore In Court(Photos) 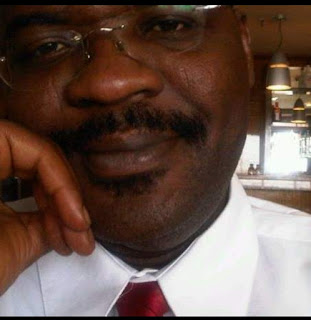 A Nigerian lawyer identified as Abdul Mahmud who was in court today has expressed his dissatisfaction over the action of DSS in court.According to him,he has not seen such during his 27yrs at the bar.According to him,Ademola,member of DSS was given others order to shoot.Below is what he wrote....
'27 years at the bar. 31 years of involvement in political/human rights struggles in Nigeria. Never seen the type of gangsterism and naked facism displayed by Buhari through his armed dogs, SSS today. Right under nose, barging through me, Femi Falana and Femi Aborisade as we stepped out of the court. We were simply rushed by armed men, intent to spear us to the ground. We all fell backwards into the court. Guns were cocked. Orders were made to shoot. "Ademola", who I recognized as leader of the gangsters, kept shouting "shoot, shoot, shoot". The police sentry at the door of the court hurriedly shut the door against over 30 armed gangsters - all masked - to protect the sanctity of the court. It was already defiled, as members of Sowore's party defended their own inside the court and the gangsters struggled to snatch him.  In the melee, Her Ladyship, Justice Ojukwu was ferried into her chambers by her security details. That's your country.
We knew there were plans to re-arrest Sowore and Bakare when contacts whispered to me as I was leaving the court room for another court room to move his human rights application motion that fresh charges are being filed. Falana was already standing to address the court when I returned to him and told him of the plans, which he duly informed the court. Surprisingly, Liman SAN, who leads the prosecution, sidestepped the information because he was in cahoots with the dog-whisperer.
Sowore was eventually taken away - on one condition: that he would be taken by his lawyers to the gangsters in his own car. No more.
The nonsense I saw today in court never happened in my years practising as a lawyer under two terrible dictatorship.  When I was snatched by the DMI in 1996, they waited outside the High Court Ijebu-Ode and trailed me to the CLO South West Ijebu Ode. I had fair number of brushes with the state; but what I saw today leaves me with two impressions: 1) The dogs are intent on killing Sowore; 2) Dictatorship is here'. 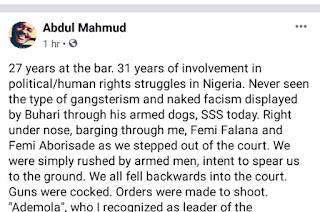 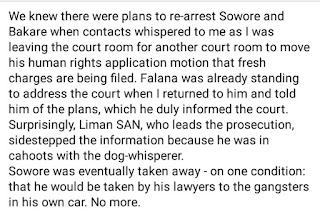