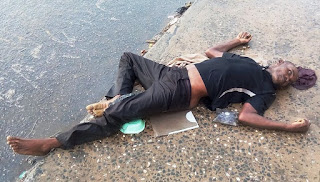 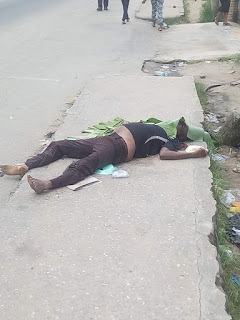 Read what a Trezzy Blog reader @Ebere sent below(posted as it was sent)....


The dead body of a man believed to be in his 50's has been found lying on the pedestrian path of Calabar road by Port Harcourt Electricity Distribution Company (PHEDC) Calabar, Cross River State.


The man according to people around has been taking refuge there for some days now.Residents also said that his death was noticed Sunday morning but wasn't confirmed until the light showers that lasted for hours yet the man still didn't move.


As of yesterday, the lifeless body of the unknown man who died in front of Port Harcourt Electricity Distribution Company  (PHEDC) in Calabar was still there.It has swollen, flies all over it, smelling as at 12noon Monday 27th June, 2016.The man was still there with those around saying law enforcement agents have been passing with none making attempts to remove the body.
Loading...
">