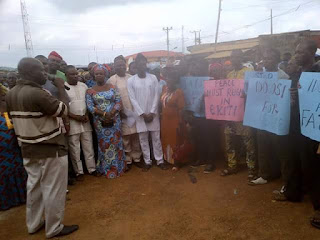 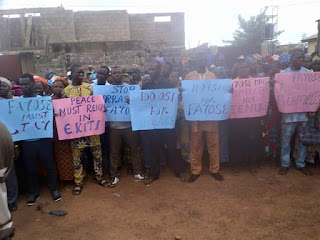 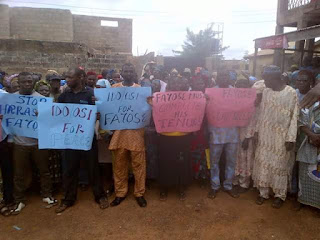 Read what Tophe Igho shared on Facebook below.....
PDP Leaders in Ido/Osi,Political Appointees And All Other concern Leaders In Ido/Osi Accompany with All Local Govt. party Chairman and All Members of PDP in Ido/Osi L.G today Staged A Peaceful Protest Against the Ongoing Stunt Of APC/Buhari Led Administration in Respect Of Governor Ayodele Fayose And For the Benefit of The Masses And PDP @large in Nigeria.Our attention has been drawn to the ongoing stunt by the EFCC and we wish to say that we encourage the EFCC to carry out its investigations without politics as it is being done now.
As already pointed out, Governor Ayodele Fayose does not have anything to do with any fund from the Office of the National Security Adviser (ONSA). He has stated how his election was funded and Zenith Bank that he said funded his election has not denied doing so.
We await reports of EFCC investigations and we hope that the anti-corruption agency will be civil enough to allow an open and transparent trial in competent court of law and not media trial just to get at Governor Fayose because of his uncompromising stance against the misrule of the APC/Buhari led federal government.
Whatever stories being circulated by the EFCC and its political allies can at best be regarded as rumour nothing but Rumour We Say. It must be bring to your notice that Governor Fayose will remain resolute in making his opinions known on national issues and will not be intimidated.
On The Placards Are.
We Support Fayose .
Ido/Osi For PDP.
We Stand With Fayose.
Peace Must Reign In Ekiti.
Ido/osi For Peace.
Stop Harassing Fayose.
Stop Harassing democracy.
Fayose Must Stay and So on
They All Said we must All Start Praying for the Victory of our Governor and PDP in The State For the Benefit Of All.
Loading...
">