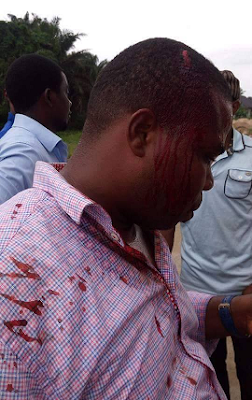 The man identified as Alex was allegedly butted with a gun booth  along Eket-Ibeno(Ebana by Peugeot Motors) by a policeman. According to the victim, a police officer stopped him and asked for his car particulars which he handed over to him. After checking the particulars and realising that all the particulars were intact, he told Alex that "you suppose know what to do nah!" When the victim insisted that he should return his car particulars the officer out of annoyance butted his head with the gun booth. He then alerted other officers and they all drove away in their Patrol Volvo.