Children Day is recognized on various days in many places around the world. It celebrates children globally. It began on second Sunday of June in 1856 by the Reverend Dr.  Charles Leonard,  pastor of the Universalist Church of the Redeemer in Chelsea, Massachusetts. Dr Leonard held a special service dedicated to, and for the children. Dr Leonard named the day Rose Day. Later,  it was named Flower Sunday, and then Children Day.

In Nigeria,  Children Day is celebrated on the 27 May. It was established as holiday in 1964.

" Never again in Ondo State  shall we allow any child to be abused. Not even the father or the mother of a child would be allowed to abuse him.  Not in our time ", he vowed.
Akeredolu revealed that the country would soon have  a "Dedicated Line" where children could make distress call for  immediate action against any form of abuse.

Speaking further, the Governor promised to develop the judicial arm of government in the state to a stage,  where they can take up necessary services for the protection of children in the state.

The Governor made the declaration on the Gani Fawehinmi Freedom Park in Akure today, where  dignitaries had gathered to mark this year's Children Day.

Akeredolu urged children to be focused and ready to take up the challenges of leadership in the nearest future.

Meanwhile,  the First Lady,  Mrs Betty Anyanwu-Akeredolu has earlier visited various motherless baby's homes to identify with children from vulnerable homes in the state in commemoration of the Children Day. 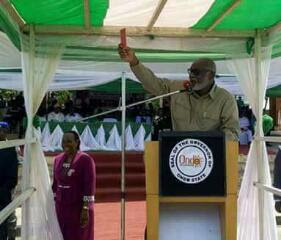