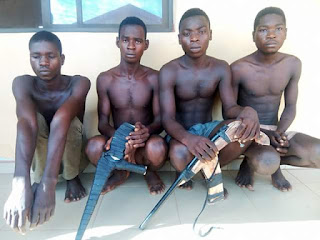 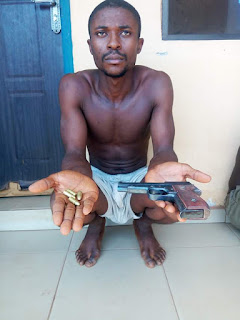 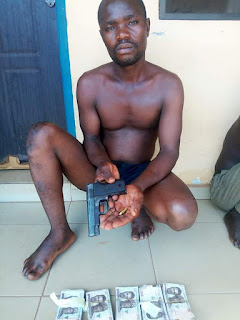 1. ARREST OF A CULTIST AND RECOVERY OF FIREARM AND AMMUNITION

On  19/05/2017, Policemen on stop and search duty along Aliade-Otukpo road intercepted one Victor Ogbu 25yrs, in possession of a locally fabricated Beretta pistol with four (4) live ammunition. The suspect who confessed to be a cultist and a student of University of Agriculture Makurdi, alleged that he purchased the firearm in Makurdi. Investigation is ongoing.

2. ARREST OF KIDNAPPER, RESCUE OF VICTIM AND RECOVERY OF FIREARM AND AMMUNITION

The Command based on information, trailed and arrested one Isaac Atsor 33yrs, on 24/05/2017 at a hideout in Ushongo LGA where they kept thier victim, one Mr. Ape the proprietor of Excel Grace School Gboko. He was arrested with the supposed ransom of ₦500,000, a locally fabricated Beretta pistol and one live ammunition. The suspect confessed to have committed the crime with four (4) others who escaped when the hideout was raided.
The victim has since being reunited with his family,while investigation and manhunt of the fleeing members of the gang is ongoing.
Preliminary investigation, however,  revealed that the suspect just finished serving a jaill term on 22/03/2017 and was released from prison custody .

The Command had on 14/05/2017 at about 2200hrs arrested the following suspects with fabricated dummy guns while committing thier nefarious activities at Ikyowe village in Katsina ala
a. Zahemen Avaa- 24yrs
b. Ebenezer Ikyereve - 20yrs
c. Teryima Orkeghen - 21yrs and
d. Lubem Torhile - 22yrs

This notorius armed robbery gang who have been terrorising innocent motorists along Katsina ala- Zaki biam road  and dispossessing them of thier valuables, met thier waterloo when operatives responded to a distress that some robbers had blocked the road.

They will all be charged to court as soon as Investigation is concluded.