According to 1st Corinthian 16:22 & Psalms 105:15 "Put not your hand on those who have been marked with my Holy oil, and do my Prophets no wrong"

Since The Lord's Chosen Ministry became a global brand, many scammers and fraudulent individuals especially through the social media, have used it as an opportunity to dupe people of their hard earned resources by claiming that they are the General Overseer of The Lord's Chosen. Knowing that the God of Chosen answers prayers, these unsuspecting victims have parted with their money and sometimes lands and other valuables.

In response to this unwholesome trend, we brought to your notice from our news desk months ago the activities of these fraudulent individuals - some unscrupulous elements who are impersonating the General Overseer of the Lord's Chosen Church, Pst. Lazarus Muoka on Facebook, Blogs, Skype, Twitter, Instagram, WhatsApp, Badoo, and YouTube using his name to dupe the General public, members and lovers of Christ Jesus huge amounts of money.

As a matter of vindication, the God of Chosen has waded into the matter. Just this week,  the Lagos State Police Commands in Conjunction with the Security Department of our great Church has arrested one Mr. Kingsley Amah who it has been confirmed as been the brain behind some of the many cases of those impersonating and parading themselves as the General Overseer of The Lord's Chosen Church.

Mr. Kingsley Amah according to interrogations has duped so many of their millions, rendered many families useless and brought agonies to the masses as a result of his wickedness.

This is the number he has been operating with to dupe people (08034134991). If you have it on your contact, kindly delete it and note that it is not the phone number of the General Overseer of The Lord's Chosen Charismatic Revival Ministries as he has been deceiving people.

Our God decided to prove His Powers to vindicate his Servant who has all these years been labouring under the sun and in the rain to win souls to the kingdom of God.

We therefore plead again to members of the church and the general public who may have fallen victims to these internet scammers and fraudsters to kindly report through their local pastors or our Corporate Headquarters, Lagos, Nigeria furnish us with the details of payment and other transactions as regard the issue on ground in order to make the records straight.

We also once again use this medium to inform the general public that Pastor Lazarus Muoka is not on Facebook, Instagram, Skype, Twitter, Blogs, Badoo, YouTube and other Social Media Pages, neither is he operating any Orphanage home nor asking for money from Members and public after prayers.

You're also warned if you're among this group of criminal elements to desist from such ungodly behaviours and confess to the Church and be forgiven; without which, the wrath of God, generational curses and hell await you.

We send our unreserved encomiums on behalf of our big Daddy, Pst. Lazarus Muoka to the Lagos State Commissioner of Police and his team of Policemen whose efforts played major roles to bringing the impersonator to book.
We pray that divine strength and intelligence be granted afresh to you all in all your dealings in Jesus name Amen.

We wish you all well as we continue believing God to bless and reunite your souls to the things of Heaven through the undiluted Salvation Messages you hear in Chosen. 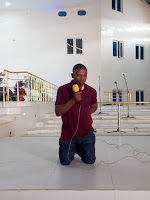 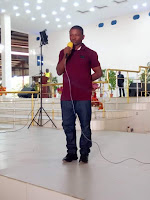