UGLY CASE OF HEPATITIS B VIRUS TRUNCATED IN CHOSEN.

"Hepatitis B is a viral infection that attacks the liver and can cause both acute and chronic disease such as liver cirrhosis and cancer. The virus is transmitted through contact with the blood or other body fluids of an infected person."

Bro Iyanda Michael was diagnosed with Hepatitis B Virus infection in December 2017.He has since been under the scourge of this illness.His condition deteriorated drastically as the months went by.He was constantly in pains and had swollen stomach, hands and legs. In search of  solution, he visited up to five different hospitals but couldn't get a cure for this ailment. The doctors simply said the infection had no permanent treatment.

Bro Michael endured many sleepless nights because of the constant pains he was under. However, during the just concluded program titled "And the Enemies submitted - ENEMIESSUBMITTED2018 " he was invited to Chosen by a brother who is an ssistant Pastor in Chosen. He honored this invitation and there the God of Chosen spotted his case and gave attention to it.

How it happened:
During the course of the prayers, Pastor Lazarus Muoka mentioned and spotted his case through the word of knowledge. He prayed and cancelled the sickness and that declaration from the pulpit of power gave hope to him.

That encounter marked the beginning of his healing process. On the 1st of July, 2018 the terrible pains disappeared.He also noticed that all the symptoms he used to have were all going gradually.

The insomnia went away and he began sleeping like a baby. Also, the parts of his body that were swollen started deflating. This healing process continued until he returned back to his normal size.

It is important to note that it got to a time he asked God to take his life because of the excruciating pains he was always experiencing. But now that he has made contact with the Chosen family, that terrible situation has been rolled away and he's very happy.

He has fully recovered and restored back to good health. Those who knew him before in his former condition expressed shock when they saw him.They can also testify that indeed The God of Chosen has done this great miracle.

His words to everyone who sees him now is, "Indeed, there is a God in Chosen that Answers Prayers" 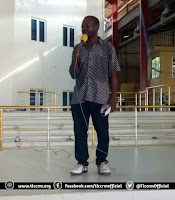