A senior special assistant to Governor Udom Emmanuel, Mr Amanam Nkanga, escaped death by the whiskers when he was brutally assaulted and attacked with dangerous weapons by a caucus member of the APC, Hon Emah Bassey at his own hometown Ikot Nya in Nsit Ibom local government area.

Mr Nkanga younger brother of former Governor Idongesit Nkanga, according to eye witness accounts,  had accompanied the divisional police officer, DPO of the area, Mr John Umoh, to an APC gathering which blocked the only express highway linking Ikot Nya with Etinan, that had prevented road users from movement out of the area.

On their arrival,  Emah Bassey, a former two term member of the House of Representatives who had stormed the venue with a truckload of supporters swooped on him and personally allegedly brought out his long knife to severe the head of the Governor's aide.

Mr. Nkanga was said to have experienced a horrific treatment as dozens of weapons were physically unleashed on him by the suspected thugs, getting him subsequently hospitalized.

Amanam who was weakened by apparent loss of huge blood, explained that the former lawmaker simply jumped at him asking him, "why are you here," before inflicting the blows on him, and knocking him out of consciousness.

Two other victims of the attack were seen at the hospital emergency surgical theatre, with deep cuts on their hands and faces.
One of the victims who gave his name as Edidiong, lost part of his teeth and had a gash on his jaw. 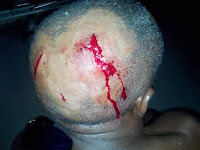 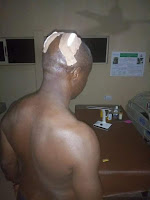 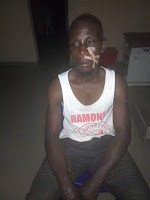 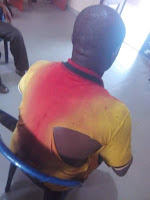 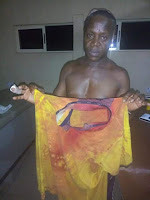