Corper named Samuel Audu(Sam Mak) who was hacked to death by a machete-wielding attacker at Low-Cost, Akwanga Council Area of Nasarawa State has been buried.He was killed while trying to prevent a burglar who was attempting to steal some bags of cement kept in a house he was hired to fix Plaster of Paris (POP) Ceiling.

The deceased recently celebrated his Passing Out Parade from the National Youth Service Corps (NYSC), 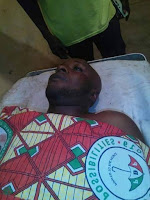