The Brazilian cost PSG £200m when moving from Barcelona in the summer of 2017.

But there have been reports of late that he is angling for a move back to Spain – either to Barca or their rivals Real Madrid.

Real have been pursuing Neymar for over a year but to little success.

And now the striker’s ties with PSG and Qatar have been greatly strengthened.

Neymar is understood to have signed a deal with the Qatari National Bank to become their new global ambassador.

The agreement guarantees Neymar’s lucrative image rights are under the bank’s control.

His father, Neymar Snr, is said to have agreed the contract and signed it off.

QNB said in an official statement: “The agreement grants QNB all exclusive marketing rights of Neymar Jr as a Brand Ambassador of all the Group’ s marketing campaigns and advertising platforms in which he will appear across its major businesses.

“The partnership with Neymar Jr underpins the bank’s key values that reflect its commitment and passion to provide its global community of customers around the world with the best banking products and raise its US $4.2bn valued brand’s visibility in support of its vision to become a leading bank in the Middle East, Africa, and Southeast Asia by 2020.

“Neymar Jr’s selection as QNB’s latest Global Brand Ambassador is a reflection of the Bank’s commitment to enriching the lives of its customers through its growing network of international branches around the world and motivating them to persevere and pursue their dreams through the inspiring image of an exceptional player.

Neymar Snr said: “We are very pleased to be partnering with QNB. Neymar Jr shares the same values with QNB and its constant pursuit of excellence and achieving great results in every game.

“We are happy to support QNB’s efforts to bring football community together through football and inspire people not to only pursue success but challenges, to be better.”

Tying down Neymar to another Qatari-based deal further strengthens PSG’s hold on the player.

Neymar quit Barcelona for PSG last year in an attempt to escape from under Lionel Messi’s shadow and win the Ballon d’Or. 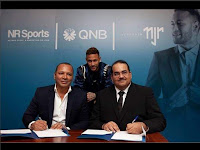