The PDP Presidential Campaign Organization (PPCO) mocks President Muhammadu Buhari for attempting to claim credit for the construction of new Terminal Building at the Nnamdi Azikiwe International Airport, Abuja, even when it is public knowledge that the project was designed, conceptualized and fully financed by the PDP administration.

The PPCO says it is unfortunate that President Buhari, in his desperation to nudge up his globally established non-performance rating, ahead of the 2019 Presidential election, engaged in yet another failed media stunt by trying to posture and claim credit for a project his administration made no contribution towards the funding and execution.

It was therefore derisory to see Mr. President and his handlers, comically swaggering and gleefully hugging the cameras at the commissioning of a project they made no contribution.

If anything, like the Port Harcourt Airport terminal building, President Buhari, in his flops, only succeeded in delaying the completion of the project, which concept and construction was perfected by the PDP, including payments to the contractors.

Is it not appalling that President Buhari, who, out of sheer incompetence and total disregard for the development need of our nation, cannot point to any key development project he had initiated and executed since his inauguration in 2015, despite the huge resources at his disposal, only to be going around the country, claiming credit for projects executed by the PDP?

Unarguably, such manifest incompetence and resort to false performance claims is the reason our federal lawmakers booed and jeered at Mr. President at the 2019 budget presentation at the National Assembly.

In any case, what would one expect from a President that has openly admitted that he lacked the capacity to manage an economy as complex as Nigeria’s for which he has promised Nigerians more suffering in the coming year.

The PDP is aware that President Buhari is desperate to validate his false performance indices, but seeking to lay claim to projects executed by our party, only shows that he has hit the end of the road.

The only option left for President Buhari is to accept his failures, as Nigerians rally behind the PDP Presidential candidate, Atiku Abubakar, to rescue our nation and return her to the path of good governance, development, national cohesion and economic prosperity. 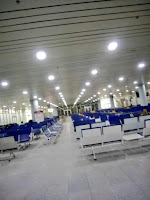