A soldier identified as Sammy fighting Boko Haram took to Facebook to share how he survived Boko Haram attack on the eve of Christmas.According to him,his wrist got dislocated during the attack.He wrote...

'This is one of the most AMAZING CHRISTMAS I ever had! We fought through 23rd to 24th which happen to be Christmas eve and last night the war got so hot that we have to withdraw and leave the camp to the enemies cuz they where toooo many and were trying to round us up to the center (ask my bestie FAITH MICHAEL, SHE WAS IN A WHATSAPP CALL WITH ME WHEN IT ALL STARTED AND SHE HEARD MOST OF THE GUN FIRE and BOMBARDMENTS). Right now my wrist is dislocated and I'm feeling sick. We slept in the cold bush as we watch the boko haram burned down our camp again for the 3rd time in  two months. Taday, none among us even remembered it's Christmas until a Fulani man came by and said HAFI KRISMAS SOJOJI! And Instead of saying "same to u baba" we all burst out laughing out loud and some cried cuz none of us even remembered it's Christmas,comon, it doesn't even look like Christmas here! and that was the only time we laughed today.and after the laughter we all went silent as we sobber deep within ourselves and recount the number of times God saved us from our enemies. The very reason He kept us alive to see this day. I thought about many things,the way it would have been if I am among the ones dead last night. How my family will feel loosing a son few hours to Christmas. My thoughts were so deep that even tears rolled down my check and all I keep saying from then is THANK U JESUS FOR NOT BRINGING ANY TRAGEDY TO MY FAMILY. Meanwhile, I'm still looking round maybe I'll find a bush rat to kill to at least cover up for this Christmas flexing I'm missing out (gat to make myself happy no matter the condition, u know). I WANNA WISH U ALL OUT THERE A WONDERFUL MERRY CHRISTMAS AND A PEACEFUL NEW YEAR AHEAD!!! But pls, bring meat and chin chin to me here oooooo.lol.AND DON'T STOP PRAYING FOR US ON THE OTHER SIDE OF A PEACEFUL WORLD' 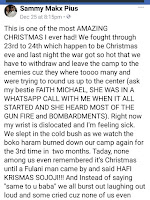 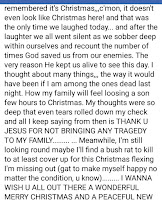 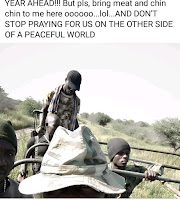