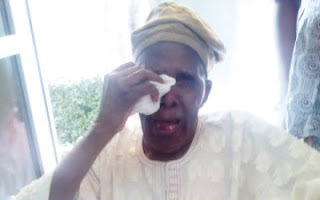 HID Awolowo's sibling Pa Taiwo Adelana, visited Ikenne, the country home of the Awolowos on Thursday and wept uncontrollably on hearing that his elder sister is dead.

The 94-yr old,a retired teacher,arrived into the Efunyela Hall inside the compound at exactly 3:20pm via a wheelchair that was pushed by a relation.He was unaware of his sister's death until he arrived Ikenne on Thursday.

While at Efunyela Hall,he was pictured weeping uncontrollably while cleaning his face with a white handkerchief.People could barely hear him because his speech was incoherent except for his exclamation of
"ha! ha! ha!" However with ample time spent and a little bit of more attention by journalists around,he  said:

'He had been dreaming about his  elder sister's death since the past three days. This, he said, forced him to insist that he should be brought to Ikenne to see his sister from Lagos where he lives'.