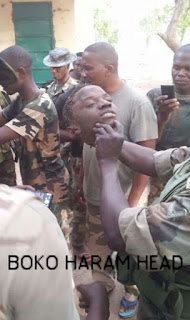 A picture has emerged of Nigerian Military men holding a dismembered head of an alleged Boko Haram Kingpin and it has gone viral.
According to reports, the Boko Haram insurgent was the strongest among the group.Nigerian troops overpowered him and cut off his head despite all his attempts to resist death.In the footage, another soldier was spotted recording the decapitated head while a soldier holds it up.However,the Nigerian military is yet to respond if they really carried out the act