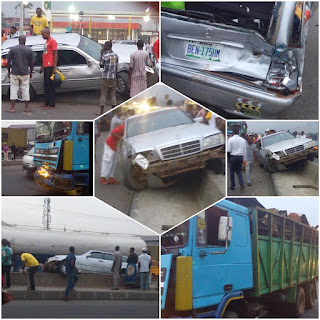 This happened some minutes ago at second rainbow, Amuwo Odofin, Lagos. According to a eyewitness(a social media user adeola twist), the Benz had stopped due to the traffic caused by commercial buses that usually block the express. While waiting, the trailer carrying condemned metal rammed into it at full speed, sending it over the divider.

The two brothers traveling out of Lagos, were however unhurt. The commercial buses are notorious for always causing accidents