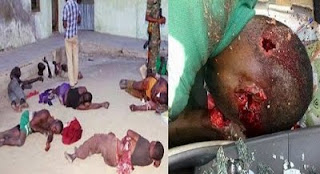 As sent by a Trezzy Blog reader @Kelechi(I did not edit anything,posted as was sent).....
'There was mayhem at Ohaji- Egbema Local Government Area of Imo State weekend when cultists killed nine people while avenging the killing of one their members by another rival group. The victims including eight males and one female were killed when the DE-WELL cult group reportedly invaded Asa Awana community.
The killing of the nine persons was said to have been carried out by DE-WELL against the DE-GBAM cult group, which was alleged to have killed one of the DE-WELL members in the area.


killed him to enable them take over the land. The killing however, irked youths who revolted against the traditional ruler causing tension in the area.
This is a developing story. We will bring you more details as they unfold'.
Nawa for some people!Wasting souls like say human life na crayfish!
Loading...
">
Newer Post Older Post Home
Comment Form is loading comments...