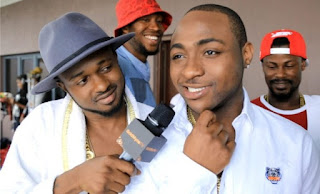 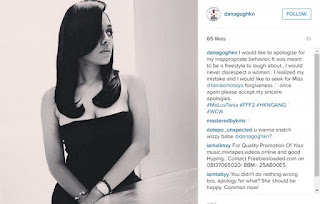 Today, Danagog who signed to Davido's HKN label in 2014 took to Instagram to apologise for insulting Wizkid's on-and-off girlfriend Tania Omotoya, and it has us scratching our heads.
"I would like to apologize for my inappropriate behavior," the singer said, adding, "It was meant to be a freestyle to laugh about, I would never disrespect a woman."

"I realized my mistake and I would like to seek for Miss @taniaomotayo forgiveness," the upcoming 'Hookah' continued in the remorseful post, "Once again please accept my sincere apologies."

And then he declared Tania Omotayo his Woman Crush Wednesday.
Well, save for one fan who said he didn't need to apologise for whatever he said, others, like me, are wondering what exactly he said. A quick check online reveals no trace of the said freestyle, and his latest single, 'Hookah', is mildly successful.
And so, the questions is this: If you insulted someone and no one heard it, did you really insult them? Or even need a public apology?
We can't wait to read Tania Omotayo's response to this.
What do you think?
Loading...
">
Newer Post Older Post Home
Comment Form is loading comments...