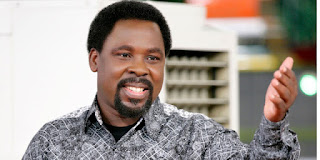 Yesterday,tragedy was averted after 4 hours of panic and the EgyptAir hijacker, Seif El Din Mustafa was arrested for grounding a plane at Larnaca airport, Cyprus, and holding the world hostage. Now, popular prophet, TB Joshua, has stepped out once again to claim he foresaw it all.
In new video posted yesterday, the prophet said he predicted the hijack last Sunday during service at The SCOAN.

"I am seeing a balloon – it was hijacked and people were inside," Joshua said in the video, adding that the scenario would be a 'breaking news', but "at the end of the day, they were able to rescue the balloon and the people… they will not be able to blow anything."
Last week, the prophet said he foretold the Brussels bombings that left over 30 people dead. But TB Joshua has also faced backlash, most notably from Malawian President Peter Mutharika,who called the prophet 'fake', and asked why he was unable to predict the SCOAN guest house collapse that killed over a 100 people.


What do you think?
Watch the video clip below....