 Home   NEWS  Udoedehe is an uncouth thug, I will not bring myself down to his level - UMANA

Udoedehe is an uncouth thug, I will not bring myself down to his level - UMANA

The managing director of the Oil and Gas Free Zones Authority, Mr Umana Okon Umana has said that it will be an exercise in futility to join issues with Mr. Udoedehe whom he described as a sick man who is depraved and irredemably insecure. Mr. Umana said he will continue to pray for Mr. Udoedehe who is his friend and brother.

According to Mr. Umana, Udoedehe is so overwhelmed by his pathological feeling of inadequacy that he vainly believes that his genetic and idiotic life of thuggery is a measure of his self confidence. But psychologists know that a man as depraved and insecure as Udoedehe actually needs help and prayers. Udoedehe is still haunted by his past and to cover up for his incurable feeling of inadequacy, he forever seeks the attention and validation of other people. He feels the only way he can conquer his past is to insult, deride and blackmail other people.
Speaking with our reporter via telephone interview in responds to Udoedehe's recent comments with the media in Uyo, Mr. Umana says that, Udoedehe, has insulted and blackmailed all the outstanding leaders in the State. He erroneously believes this is the way to show that Udoedehe is a confident man. He is totally wrong. It has more to do with character and upbringing. A thug in the motor park is not necessarily a confident man. He is a thug because he has low self esteem. A man who is known to boast that he owns 50 cars all parked in his house needs help. It speaks to his self esteem. Character is everything in life. Udoedehe was removed from office after a few months for misconduct when he served as the Uyo local government chairman.

While at the Senate, he was suspended by his colleagues for misconduct. As Minister, Udoedehe was removed from office with ignominy after a few months for reasons that had to do with with incompetence and insubordination. Udoedehe was nominated for the position of Minister in 2007 by former Governor Godswill Akpabio. Udoedehe was the biggest beneficiary of Akpabio's first term administration. He was a caucus member of Akpabio's administration. When he was sacked as Minister after a few months for unruliness and incompetence rather than blame himself, he shamelessly blamed Akpabio and other people. He contested the 2011 elections and lost woefully inspite of his penchant for violence. After he lost the elections he callously abandoned the Party only to reappear in 2014 just before the primaries.

He was roundly defeated at the Primaries and later as is in his character proceeded to insult and blackmail the National leaders of the Party. He boycotted the Uyo Presidential campaign rally. Today he wants to reap from where he did not sow. The later day attempt by Udoedehe to distance himself from Akpabio is laughable. He became Minister courtesy of Akpabio but did not have the capacity to keep the job. He was an Akpabio man to the core until he lost his job as Minister and thereafter Akpabio refused to release government money to enable Udoedehe to fraudulently acquire Oku Iboku Paper Mill. As we speak Udoedehe meets with Akpabio and leaders of the PDP at night but will call Akpabio a devil later in the day Nobody can be fooled now by acts of duplicity and treachery performed for a fee. PDP leaders started boasting that Udoedehe has been given the contract to destabilise APC.

This is why his recent unwarranted attacks on APC leaders must be viewed within that context. Leaders should be well grounded in character and in learning. A friend told me Udoedehe thinking he can conquer his past without changing his attitude recently procured a PhD degree. His recent conduct has confirmed what decent men always suspected. The procured degree is worthless. As the say the hood does not make the monk. Many of our leaders in the State including paramount rulers who have been routinely insulted and blackmailed by Udoedehe have decided to ignore him. They now know that the man is sick, depraved and insecure for reasons that have to do with his past. Forget about all his bravado, Udoedehe is irredemably depraved and insecure and weak. Psychologists know that his idiotitic obstreperousness and loquaciousness only cover up for a deep character flaw. I knew this all along and that was why I decided to ignore Udoedehe. I will continue to do so even as I pray for him. I will continue to be myself in spite of Udoedehe by holding on to the values of integrity and civility.

I will remain principled and stand up for what I believe in. I personally led the struggle to deepen democracy and uplift our State when I contested the 2015 governorship elections. We took the battle to its logical conclusion within the purview of the law. I did not betray or abandon our people at any stage of the struggle. We fought with courage and tenacity of purpose.

Foolishness, inconsistency, unruliness, blackmail, falsehood, incivility have nothing to do with confidence or courage. Udoedehe can contest the governorship of Akwa Ibom State. It is within his right to do so. It is also within our right to decide who should be governor. 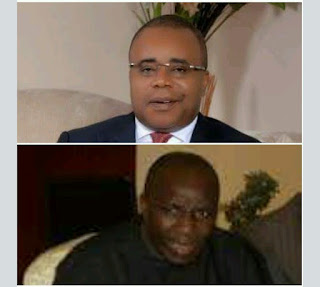