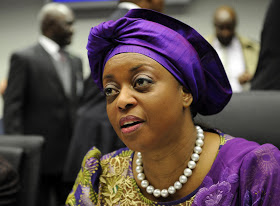 Family members have confirmed that ex-minister of Petroleum resources, Dieziani Alison-Madueke is currently ill.According to the family source,Dieziani is receiving medical attention at a UK hospital.Revealing the news to Leadership Newspaper,a family member said:
"Our daughter has been in hospital where she is receiving treatment for some weeks now. She is currently under close medical observation. We learnt that the observation means that she has been unable to see anyone outside close family members over the last few weeks.
They have also discouraged her use of phones to avoid any risk of infection which will be extremely harmful for her. Diezani is responding well, but doctors are concerned about her movement and interaction given the intense treatment being administered. It is such an emotional time for us all as she is quite fragile and we are careful to keep her away from all the gossip and falsehoods being attributed to her in the media. We expect the media to respect the family's feelings at this trying time. The press, especially online media, should be careful to be professional and balanced in their reporting."
Loading...
">