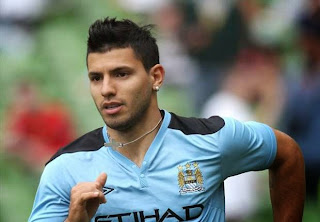 Manchester City striker Sergio Aguero believes the club can still win the Premiership.
The club suffered a shocking 2-1 defeat against Crystal Palace on Monday,trailing behind Chelsea with 9points with Chelsea having a game in hand.However,the striker is optimistic the club can still turn things around despite occupying 4th position in the EPL table with 7 more matches to go.
Speaking with Sky Sports News HQ,he said:
"Of course we can still win it."
"In football, anything can happen - as soon as you think something is certain, then everything changes, we have seen it so many times before
and we'll see it again.
"We only focus on ourselves, try to win every game we play and keep pressure on Chelsea."
City will play city rival Manchester United this weekend.Having won four successive derbies,Manchester United skipper Wayne Rooney believes this is United time to win the derby.
Loading...
">