Mr Femi Adesina was invested with the title of Ugo Mba (Eagle of the Community) by His Royal Majesty, Eze Elder Nelson Nmerengwa, the Isiala 1 of Isieketa. This was part of activities marking the 60th birthday of the monarch, as well as the 19th anniversary of his coronation.

Adesina dedicated the title to God, and to President Muhammadu Buhari, whom he pledged would make great impact on all areas of the country, particularly the South-East geo-political zone.

This is the second title the S.A Media would receive from the South-East this year. In January, he was given Nwanne di Namba (a brother from another mother) by Igwe Madu Nevobasi of Nmaku Kingdom, Awgu Local Government, Enugu State. 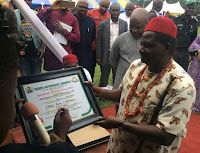