The bridge got an extra 250 and 200 metres access road from both ends before its completion.

The bridge is located on the Tegina-Mokwa-Jebba route.

Tatabu bridge, washed away, after a torrential rainfall, has left  all categories of vehicles plying the busy road stranded for days while some trucks fell into the bridge but no life was lost.

Besides the bridges being washed away, the railway line, also along Tatabu village to Mokwa, was also washed away, thereby putting a stop to railway transportation between the South and the North.

Meanwhile, Ilorin-Mokwa- Jebba road had been in deplorable  condition for several years.

The journey between Ilorin through Jebba to Mokwa, which should ordinarily take about two hours, had taken between four and five hours until last year when the contract to rehabilitate the  road was awarded.

Motorists were  informed  to pass through Okenne-Lokoja-Abuja road to Niger state and other parts of the North then but now the road is accessible. 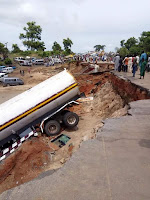 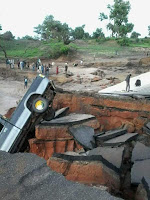