Barely 24hrs after Francis, a final year student of Microbiology died as a result of negligence and dilapidated nature of the school medical centre, the students have gone down the streets to show their dismay over the death of their colleague who shouldn’t have died.

According to the deceased course rep, who identified himself as Emeka,the deceased slumped when he was playing basketball with mates and was rushed to the school medical centre, which is just some meters away from the basketball court. They were surprised that on getting to the medical centre, no resident doctor was there to attend to emergency. Later when the doctor arrived and asked for oxygen, there was none.He  referred them to another hospital, where they rushed the deceased but unfortunately he was confirmed dead at the hospital.The students are protesting in other to prevent further occurrences, since they have lost two students earlier this semester.

Report from one of the protesters, stated, that they most annoying thing was the comment from the dean of student affairs who said

“this is Nigeria where things don’t go well, that here is Awka not like Nnewi where there are facilities and equipments” and also the comment from the school P.R.O, ” that the student died before he was brought to the medical centre”.

Also he stated that the security threatened to deal with them if they continue the protest, calling on the good people of Anambra state to come to intervene. 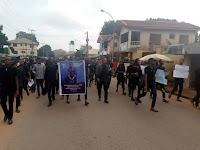 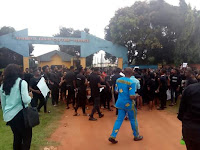 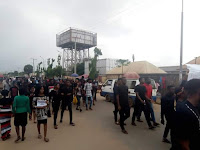