Deji Adeyanju has shared the pathetic story of why over 100 soldiers were killed by Boko Haram in Bama ad Jilli attacks.According to him,most of the soldiers were not adequately remunerated despite the army promising them a mouth watering pay.Many of them were also first timers and had not receive adequate training.Below is what he wrote....

'Most of the soldiers and officers killed by Boko Haram in Bama and Jilli attacks were moved from 9 Brigade, Ikeja, Lagos, 81 Div & other locations. Most of the soldiers were promised mouth watering cash between 100-150k extra aside salaries and daily allowances.

They pay them only 30k allowances which is not even consistent. The Generals loot all the billions. The number of soldiers killed is way above 100. They are still discovering many dead bodies and so many are still Missing in Action.

Funny thing is that many of the soldiers were first timers to this fight and had not received any major training since joining the Army except for the mandatory Counter Terrorist course in Katangora upon graduation from depot or NDA.

For instance, the former Garrison Commander of Ikeja cantonment was among those drafted for this exercise. He is still Missing in Action just like several senior officers. No one has contacted their families.

The only way family members know their sibling are dead is when their friends in the field contact them and send them pictures of dead body of their sons.

Many of the families have tried to contact the COAS asking for the dead bodies of their siblings with no luck They've refused to contact the N.O.K. From luring soldiers & officers to push BH to the fringes according to the NA to denying the deaths of our soldiers, a new reality.

Aside threatening soldiers in the field not to give information out, Buratai led Army has not only failed our nation but the soldiers that died serving.

I hereby volunteer myself for arrest by Buratai. If you have any info about our over 100 soldiers killed, contact me' 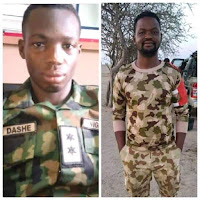 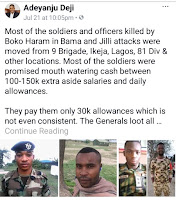