A man, Seun Ogunmola and a lady identified as Deborah Iyanuoluwa who are students of Accountancy, HND2 at Rufus Giwa Polytechnic, Owo, Ondo State (RUGIPO) formally the Ondo State Polytechnic have been reported to have critical injuries in a road accident caused by a hot chase from the Special Anti-Robbery Squard (SARS).

The incident happened on Wednesday, 11th of July, 2018, adjacent to the Technical College, Owo around 6:35pm on the expressway leading to the central part of Owo, Ondo State.According to report,the SARS agents gave the victims who were in a Toyota matrix car a hot chase in attempt to apprehend them, suspecting they were internet fraudsters - Yahoo.
Subsequently, their car lost control due to the reckless driving in attempt to escape from the security operatives.Suddenly Ogunmola jumped out of the moving car but Iyanuoluwa remained in the car till several somersaults, then it stopped on the pedestrian lane before two unidentifiable good samaritans came to their rescue.

According to report, the SARS agents fled on sighting the incident.Consequently, Ogunmola sustained serious fracture in the leg and slight neck injury while Iyanuoluwa sustained bruises over her head and arm.They have been admitted at the Federal Medical Centre, Owo (FMC). 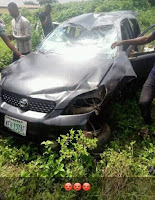