Text Of Press Conference By The National Working Committee of the Peoples Democratic Party (PDP) On The Unsavory Situation In Ekiti, Being Orchestrated By The APC-Led Federal Government To Scuttle The July 14, 2018 Governorship Election In The State.

Ekiti: Democracy Under Attack In Nigeria!

Gentlemen of the press, our democracy has finally come under heavy attack. You will recall that the PDP had earlier alerted that President Muhammadu Buhari and his party, the All Progressives Congress (APC) are on self-succession cruise to turn our nation into a fascist state.

Recently, the APC factional National Chairman, Mr. Adams Oshiomhole, boasted that they were going to crush the opposition. Today, the siege has began.

The situation in Ekiti State has reinforced the signpost of a manifest desire by the APC and its leaders to subdue the resilient spirit of Nigerians and set up a totalitarian regime in our country.

This morning, in its desperation to forcefully take over Ekiti State, the APC-led Federal Government deployed armed police personnel led by one Compol Mopol Echel Echel, who blocked the Ekiti State Government House, attacked and placed the democratically elected governor of Ekiti State, Governor Ayodele Fayose, under house arrest. At the moment, no one goes in or out of the government house.

The invading police squad sacked the official security at the Government House, fired sporadically into the premises during which Governor Fayose was beaten up by Policemen and brought down by volleys of teargas while several others were injured.

This, we have been informed, is part of the ‘order from above’, in line with the earlier boast by the Buhari-led APC, to “cage” Governor Fayose ahead of the July 14, 2018 Ekiti governorship election, so as to grant their agents a field day to rig the election.

In fact, we have been made aware that the invasion was a plot to assassinate Governor Fayose and blame it on accidental discharge by one of the policemen.

The PDP marks this siege on an elected governor and a government house as a recipe for violence; a complete attack on our democratic order and direct assault on the corporate existence of Ekiti and her people as a federating part of our nation.

We know that this is part of the desperate effort by the APC-led Federal Government to intimidate, subjugate, frighten and overawe the people and unleash a rigging mechanism for the election.

Information available to the PDP reveals that part of the rigging design includes the deploying of an APC state governor in each of the local government areas across the state to coordinate the plot.

We also know that the APC rally on Tuesday, which was boycotted by the people of Ekiti State, was a gimmick to import thugs from neigbouring states. Our supporters, who have been placed at red alert have been monitoring all strange faces already milling around in various local government areas in the state.

Also our intelligence reveals that the 30,000 policemen as well as some compromised military personnel deployed to Ekiti state are being positioned to embark on mass arrest and harassment of Ekiti citizens with the view to frightening them and preventing them from participating in the election.

Furthermore, some heavily armed DSS personnel are being deployed to work with some compromised officials of the Independent National Electoral Commission (INEC) to smuggle in preloaded card reader machines and result sheets, to be exchanged in advance, which they will attempt to deliver to APC agents.

The PDP is fully aware of the actors in this heinous plot including some directors in INEC, particularly in its Information Communication Technology (ICT) Department, who have been holding clandestine meetings with APC leaders.

We are also not unaware that the stage is being set for the APC to use INEC to announce a pre-determined result in Ekiti State governorship election.

The PDP however states, in very clear and unequivocal terms, that all these machinations will end in vain as nobody, no matter the evil device used, be it harassment, threats, arrests or even murder, can subjugate the people of Ekiti State and forcefully take over their leadership in this election without their consent.

Let the world know that the people of Ekiti State cannot be cowed or frightened and that they are not ready or willing to allow anybody to subvert their determined will to elect a leader of their choice.

We want all to know that Ekiti people are fully determined to take their destiny in their hands on July 14, 2018 and no bullet or oppressor’s whip can stop them. They are fully ready now, more than ever before, to face all threats and harassment and to resist any attempt to forcefully take over their state.

We therefore warn all thugs imported from neigbouring states to note that they are in Ekiti at their own peril. Ekiti people and residents know themselves and will never allow any stranger to participate in the electoral process. Any attempt by anybody to test the will of the people might be faced with dire consequences.

Furthermore, our ‘eyes’ have been stationed in every polling unit, every collation center as well as every exit and entry point across the state and those seeking to rig the election must be sure they will be stopped in their trail with every available instrument in a democracy.

It is a settled fact that Ekiti State is a well-known stronghold of the PDP and we will not, in anyway, accept anything short of free, fair and credible election, abundantly reflecting the will of the people. Anything to the contrary might attract very terrible consequences.

Awfully, the Ekiti action is a wild attempt by the incompetent President Muhammed Buhari and his dysfunctional APC to kidnap our democracy.

Finally, we invite the entire world to note how the APC and INEC are stoking crisis and violence in Ekiti State and to hold them responsible should any harm befall Governor Fayose and should there be any breakdown of law and order before, during and after the poll.

We must stop this siege  against our democracy! 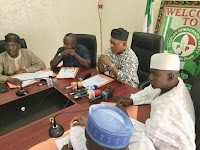 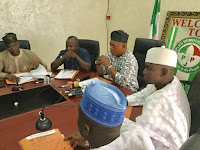 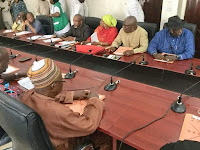