Fraud In Army:Soldiers Brutalise A Man After His Name Was Wrongly Substituted In Ongoing Recruitment Exercise In Jos(Photos)

A Nigerian man has been allegedly brutalised by army after his name was wrongly substituted in the ongoing army recruitment exercise in Jos.He was beaten and punished by army when he discovered that his name which was originally in the list of people that passed the the initial phases of the exercise was substituted.Below is what IG Wala wrote...

'Attention HQ Nigerian Army,
WHY THE BRUTALITY ON THIS PATRIOTIC CITIZEN SEEKING TO SERVE HIS COUNTRY?
Isreal Jonathan Ponmark with (77RRI/PI/464/0102037 serial number 158 Langtang North was part  of the on going Nigerian Army Recruitment exercise at the Physical Training Ground of Maxwell Khobe Cantonment in Rukuba Barracks, Jos. The exercise started on the 9th of April and scheduled to end today the 21st of April 2018. After the physical psychology test, names were called and said to have been fit to appear before the board for final phase of the exercise. After he got there, the Commander Medical 3rd Division Hospital who was the same person that called his name yesterday came with fresh list and this candidate didn’t hear his name including four others. They were asked to come outside and sit on their heads. They used logs of woods to cane them and chased out of barracks afterwards. The photos speak for the level inhumane treatment given to him and others.
AS OF THE TIME OF THE REPORT, ISREAL’S BACK WAS RAPIDLY BEING SWOLLEN & EXPERIENCING SERIOUS HEADACHE.
This is a call on JusticeForIsreal'. 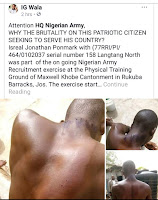