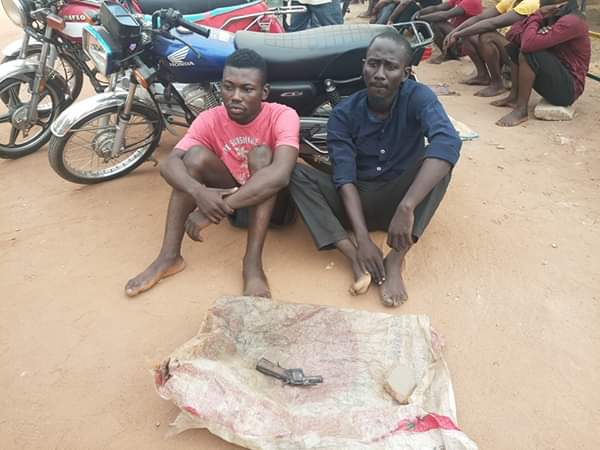 BENUE STATE POLICE COMMAND PRESS RELEASE AND PARADE OF SUSPECTS
The Command in its Continuous onslaught against crime and criminals in the State has yielded more positive results over the past few days.
1. ARREST OF ARMED ROBBERY SUSPECTS RECOVERY OF ARM AND STOLEN MOTORCYCLE: On 23/01/2019 at about 0800hrs, one Mnena Mbakuu f of behind Teachers’ Service Board Makurdi reported that on the same date at about 0530hrs, she stood by the road along Ishaya Bakut Road waiting for motorcycle (Okada) to convey her to motor park. Suddenly, two men on a motorcycle later identified as James Akar m 25yrs and Abdul Samaila m 25yrs attacked her on gun point and dispossessed her of her valuables, valued Eighty-Three Thousand Naira (N83, 000.00).
The Suspects were chased and  arrested by vigilant Police men on patrol, one locally made pistol and one Honda Motorcycle with Reg. No. MKD 775 QB were recovered from them. Suspects would soon be arraigned in Court.
2. ARREST OF SUSPECTED ARMED ROBBER AND RECOVERY OF ARMS: On 25/01/2019 at about 2100hrs, on receipt of information that some armed men were sighted attacking and robbing innocent citizens of their belongings at Uga village, Police Operatives in Buruku rushed to the scene and arrested one Torkuma Aghi m 24yrs of Tongov Gbir village Katsina-Ala, while others escaped into the bush. The following items were recovered from him:
i. One locally fabricated gun
ii. Two (2) live cartridges
iii. One (1) expanded cartridge and
iv. One unregistered Bajaj Motorcycle earlier robbed from one Martins Godwin m of Katsina-Ala LGA.
Effort is ongoing to arrest other fleeing members of the gang.
3. ARREST OF SUSPECTED ARMED ROBBER AND RECOVERY OF FIREARM: On 27/01/2019 at about 0200hrs, based on credible intelligence, one Tersoo Ngutswen m 30yrs of Awe Street was arrested and one locally fabricated gun with five (5) live cartridges were recovered from him. Investigation is ongoing.
4. ARREST OF ARMED ROBBERY SUSPECT AND RECOVERY OF FIREARM: On 28/01/2019 at about 0200hrs, on receipt of distress call that some cult boys were planning to attack Kighir Village Makurdi. SARS Operatives promptly moved to the area and arrested one Mohammed Rufai m 24yrs and recovered one locally fabricated pistol with one live cartridge. Suspect would soon be arraigned in Court.
5. ARREST OF ARMED ROBBERY SUSPECTS AND RECOVERY OF FIREARM: On 29/01/2019 at about 1200hrs, Police Patrol team sighted some youths chasing one young man at km 3 Gboko road Makurdi for allegedly robbing someone, the team also pursued and arrested the suspect later identified as Andura Aondona m 22yrs with one Asumbo Damian m 23yrs who rode on a motorcycle in an attempt to rescue the first suspect before they were apprehended. The following exhibits were recovered from them;
i. One (1) locally fabricated pistol
ii. Two (2) live ammunition
iii. One (1) expended ammunition.
Suspects would soon be arraigned in Court.
6. ARREST OF SUSPECTED ARMED ROBBER AND RECOVERY OF FIREARM: On 30/01/2019 at about 1800hrs, a team of Operation Zenda operatives while conducting stop and search at Ushongo LGA intercepted and arrested one Aandohemba Iorngu m 36yrs.
On the spot search, recovered
i. Two (2) locally fabricated revolver pistols
ii. One Red Daylong motorcycle
Suspect would be arraigned in Court soon.
7. ARREST OF A SYNDICATE OF VEHICLE SNATCHERS AND RECOVERY OF MOTOR VEHICLES: The Command had on 01/02/2019 at about 1800hrs smashed a criminal syndicate who specialize in hiring vehicles in Makurdi and Otukpo towns as passengers and then drugging unsuspecting drivers/vehicle owners with sedatives before dispossessing them of their vehicles.
One Muhammad Sarki m of Adamawa State was arrested during stop and search at North-Bank Makurdi and a Sharon Bus with registration number FKJ 98 BU which was snatched from the driver was recovered from him.
Investigation led to the arrest of the following members of the syndicate:
i. Abubakar Garba aka Mazamaza 40yrs of No. 3 pipeline area Otukpo and
ii. Ibrahim Abu of opposite Central Market Ugbokpo in Apa LGA and the recovery of a Honda Accord vehicle with registration No. ABC 870 TS.
Suspects would soon be arraigned in Court.
8. ARREST OF A SUSPECT AND RECOVERY OF A STOLEN VEHICLE: On 02/02/2019 at about 0730hrs, SARS Operatives arrested one Ifeanyi  Christopher m 34yrs at Yola in Adamawa State with a stolen Toyota Sienna Bus.
The said vehicle was reported stolen on 27/01/2019 from where parked at Officon Hotel along Otukpo road in Makurdi. Unrelenting efforts by the Benue Command SARS operatives led to the arrest of the suspect and recovery of the stolen vehicle.
Investigation is ongoing with a view to recover more of such vehicles.
CP. Omololu S. Bishi fdc assures the good people of Benue State of the Command's effort in ensuring that crime is brought to the barest minimum in the State.
DSP. Moses Joel Yamu
Police Public Relations Officer (PPRO)
Benue State Command 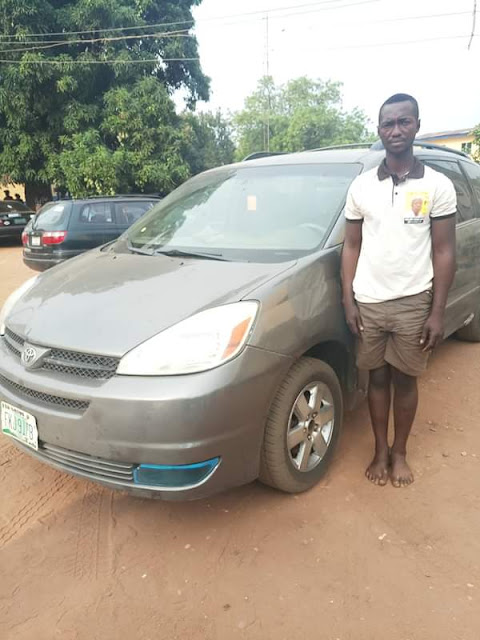 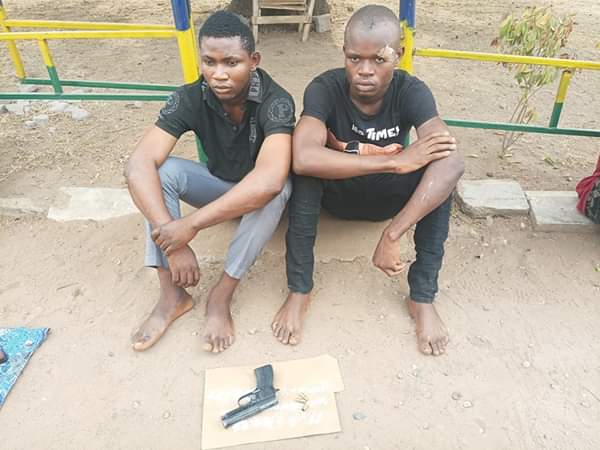 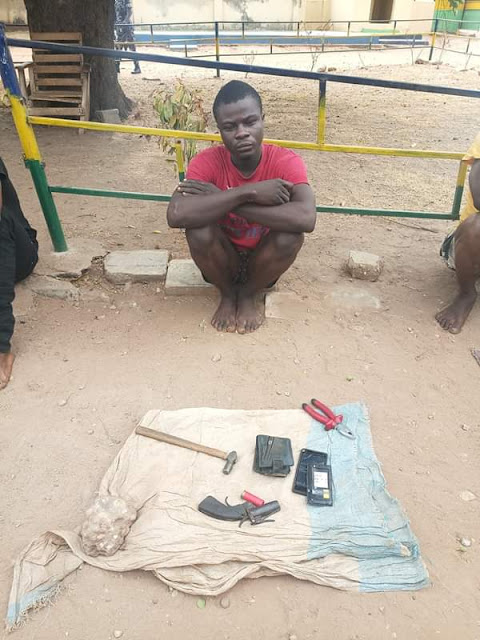 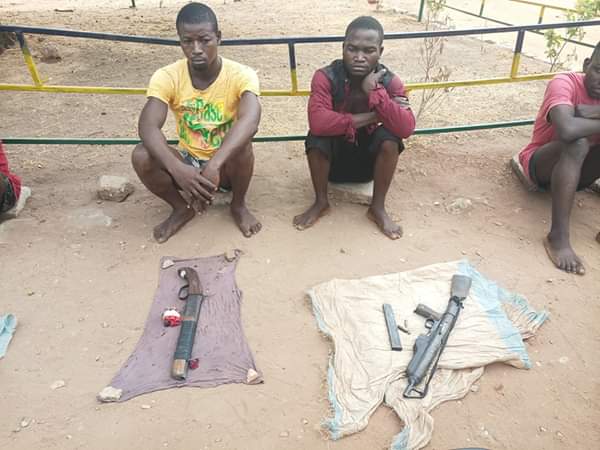