Policemen on duty in Lagos help man change his flat tyre,give him water to wash his hands(Photos)

A man named Nanka has narrated his experience with policemen he met on Third Mainland Bridge.According to him,they helped him change his flat tyre and also gave him water to wash his hands.In part he wrote...

'I was driving on third mainland bridge and had a flat tyre just before the Yaba turning. As I pulled off the road to change the tyre, a police man approached me asking what the problem was. Before long he had called his colleagues and they were helping me change my car tyre.

I must confess, I was a bit uncomfortable seeing the officer getting down to change the tyre while I assisted.

After changing the tyre, they gave me a pack of sachet water to wash my hands, then I was wanting for their next move.

To my surprise they simply wished me well as I continued my journey, absolutely no request or demand for anything.

So I want to say a very big thank you to officers Zakari, Adeyemi and Augustine Ameh for really demonstrating that the police can really be your friend'. 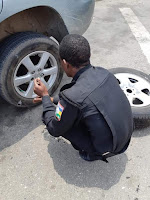 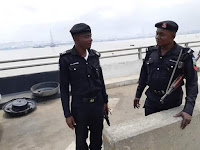 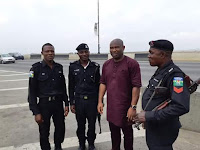 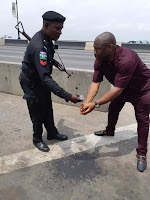 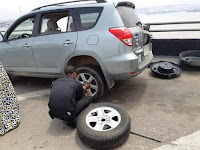