This is Norbert Owona, former captain of the indomitable lions of Cameroon who lost everything he had in life, lost his family in an accident, became sick and homeless. After asking the government of Cameroon for help to no avail, Cameroon football Legend, Samuel Eto'o paid him a visit , gave him 500,000FCFA and promised to give him a  brand new house.

The former captain of the Indomitable Lions of Cameroon, Norbert Owona (67) lives a life of misery after his glorious football career.

The first sportsman from the New-Bell district to play in the Cameroonian selection and the first footballer to buy a car in Douala in 1968, is homeless. Driven by his owner for unpaid bills, he spends his nights on a veranda at the New-Bell neighborhood in Douala. “I sleep like an animal, I did not know my country could leave me like that,” he told Equinox TV. For two years, I have a problem with my testicles (an inguinal hernia). And it sucks my blood" 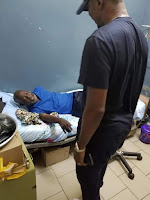 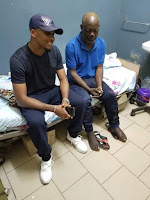