One of the two suspected armed robbers arrested by men of the Ogun State Command of the Nigeria Police, Abeokuta, in the early hours of  Wednesday, has revealed that part of their strategies for successful car theft was to equip themselves with Premium Motor Spirit (PMS), otherwise known as petrol.

The reason for that, according to the suspect, Taiwo Raheem, was in case the targeted vehicle was shot of the essential product, a result of which might stall their plan of doing away with the vehicle.

Raheem had invaded Oke-Odo community in Soyoye area of the ancient town of Abeokuta with five other members of the deadly gang, with Taoreed Adegbite, also a resident of the community, as leader, who later gave up the ghost following severe injuries inflicted on him by irate mob.

As put by Raheem, "whoever fails to plan, plans to fail. That is the essence of our going on operation with at least 10 liters of petrol. When we got to the area, with the late Adegbite as the leader and pointer, he fired a shot into the apartment through the window, a dangerous trend that sent shivers down the spines of the occupants and forced the owner of the car to throw the key to us, also through the window".

According to the 42-year old Raheem, the gang members went into the car and started the ignition, only to realize from the fuel guage that the fuel in it would not take them far and, as such, they filled the tank with the petrol they went with before escaping with it.

However, in their desperado intention to do away with the car at all costs, not minding that it was dawn, then about 5:00, the hoodlums initially abandoned the car on a street and joined Moslem faithful in the community in the early morning prayer, only to return to the car and ran into people's ambush.

The mob, who sighted their guns on the back seat of the car, succeeded in getting the two members, while the remaining four escaped.

The irate mob pounced on the duo of Raheem and Adegbite, beat them blue and black, and in the process, detectives from Lafenwa Police Station, who were on their trail, arrived at the scene and arrested them.

On the instruction of the state Commissioner of Police, Iliyasu Ahmed, the two suspects were handed over to the Federal Special Anti-Robbery Squad (FSARS), with a further directive to smoke out the fleeing members of the gang. 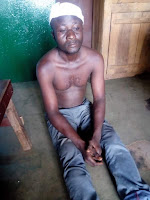 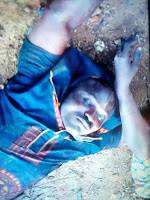