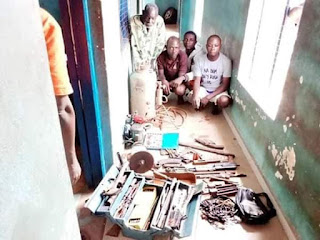 BENUE STATE POLICE COMMAND POLICE PRESS BRIEFING ON 8th AUGUST 2019
Benue State Police Command has deployed numerous strategies to Fight crime in the state and ensure a peaceful environment. This is evident in the peace experience in most parts of the state. The Command has been able to strategically map out possible 'black Spots’in the State and deployed its manpower and resources to ensure that such places are secured. "Operation Puff Adder” is obviously securing Local  governments areas where kidnapping and robbery were noticed. These strategies have aided prevention of crime in the State and apprehension of offenders. Several offenders have been charged to court but it has become important to bring to you some of the arrests made by the Police.
1. ARREST OF ILLEGAL ARMS MANUFACTURERS: On 02/08/2019 at about 2030hrs one Mkarvter Shagbe and Terseer Makuna all ‘m’ of Vandekya were
arrested with an AK 47 rifle loaded with 10 rounds of live ammunition. further investigation led to the arrest of an illegal arm manufacturer one Terhembafan and recovery of two more AK 47 rifles, two (2) single
barrel pump actions, two (2) locally made pistol, four (4) magazines, one (1) gas cylinder, assorted gun manufacturing tools and charms. Investigation is still in
progress.
2. ARREST OF A SUSPECTED KIDNAPPER:
On 30/07/2019 a victim from Vandekya Local Government Area reported at Vandekya Police division  that some unknown persons called and threatened him to send to them the sum of two million naira or they will kidnap and kill him. Investigation led to the arrest of one Kpehe Terfa Godwin Vandekya who was arrested from his hide out  at Tsar village. Suspect confessed to the crime.
3. ARREST OF A SUSPECTED RAPIST:
On 6/8/2019 at about 1800hrs it was reported that  one Masenengen Targba 'f' 10 years old was rapped by an unknown person, got pregnant and was delivered of a baby girl. The uncle of the victim, one Iorja was  making arrangements to marry her out to an old blind man. Investigation led to the arrest of one Terna Taga 'm'  18 years old of North-Bank, Makurdi. The Suspect confessed to the crime and  will soon be arraigned in court.
4. ARREST OF SUSPECTED CULTISTS: In response to intelligence gathered about increase in cult activities in Otukpo town, One Joseph Sunday also known as 2Pac was arrested as a suspected leader of White Jurist cult . The suspect was arrested on 03/08/2019 at about 1300hrs in possession of a locally made pistol and one expended cartridge.
Investigation is still in progress.
5. ARREST OF A SUSPECTED ARMED ROBBER AND RECOVERY OF FIRE  ARM: On 05/08/2019 at about 0430hrs there was a distress call received from Otukpo that some armed robbers were operating at Ankpa Street, Otukpo. A team of Police Officers was deployed to the scene where one Ahmed Yusuf ‘m’ of Otukpo was arrested with a locally made pistol and charms. His other gang members are still at large and efforts are being made to apprehend them' Investigation is still in progress.
6. ARREST 0F A SUSPECTED ARMED ROBBERS AND RECOVERY OF FIRE ARM: Following activities of kidnapping and robbery at Ukum Local Government, a raid was conducted at Jootar and one Msonga Akujor ‘m’ of Jootar was arrested with an AK 47 rifle. Case is still under investigation.
7. ARREST OF A SUSPECT OF CHILD TRAFFICKING: on 5/8/2019 at about 0530hrs One Achogwu Daniel 'm' of Otukpo town allegedly took a pregnant minor to Aba, Abia State where the victim was delivered of a child and  he sold the child to an unknown person. Investigation is still in progress.
8. ARREST 0F A SUSPECTED ARMED ROBBER AND RECOVERY OF FIRE ARM: On 29/8/2019 at about 2130hrs a police patrol team on stop and search at Ugbokolo, one Emmanuel Ilom was arrested at Okpoga-Ugwu with one locally made  pistol and one cartridge. Case will soon be charged to court
9. ARREST OF  SUSPECTS FOR EXTORTION: On 31/07/2019  the following suspects who claim to be personnel of Nigerian Merchant Navy were arrested for mounting an illegal check point at Oklenyi, Okpoga road, where they were extorting money from motorist . (1) Oguniran Stephen (2) Daniel Igiho (3) Ada Ngbede (4) Ada Ofugocho.
These achievements are indicative of the fact that members of the public and the police are demonstrating commitment towards securing the entire state. The command will continue to partner with members of the public and other security agencies to ensure a safe Benue.
CP MUKADDAS M. GARBA
COMMISSIONER OF POLICE, BENUE STATE POLICE COMMAND. 8th AUGUST, 2019. 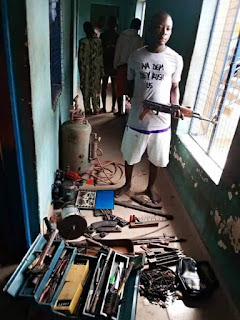 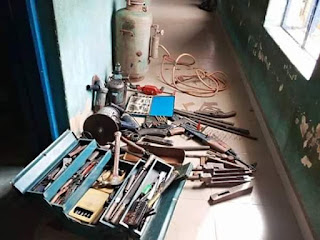 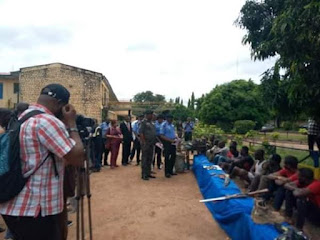