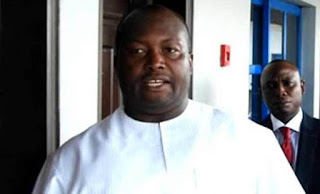 https://www.instagram.com/p/BDnj8TURrwU/
Billionaire and entrepreneur Ifeanyi Ubah is in the spotlight for his role in the melee that erupted during a Nigeria Professional Football League (NPFL) match between his club,FC Ifeanyi Uba, and Heartland FC.
The LMC had on Wednesday sanctioned all parties involved, with Ifeanyi Ubah "charged for the encroachment of their supporters on the technical area immediately after the match against Heartland and acting in a manner capable of bringing the league to disrepute contrary to Rule 13.8 of the Rules and Framework".
The club was also sanctioned for failure to ensure "adequate security, crowd control and for granting access to unauthorized persons to restricted areas, contrary to Rule B13.52."


But the LMC has said it would review the sanctions earlier meted out against Ubah and Heartland goalkeeper, Ebele Obi, after a video showed more details of the roles played by the two actors.
The Nnewi-based FC Ifeanyi Ubah was accordingly fined N500, 000 on each of the two breaches and allowed 48 hours to appeal the ruling in writing or submit to the decision of the LMC.


Their chairman, Ifeanyi Ubah, merely got a slap on the wrist by the LMC for failing to show positive example by encroaching on the pitch and fueling the disturbances, while Heartland goalkeeper was banned from all NPFL activities and matches for six matches.
The video showed that Ubah actually slapped the Heartland goalkeeper, and the LMC is on the spot as Nigerians eagerly await the mogul's punishment.
Watch the video on the link above
Loading...
">
Newer Post Older Post Home
Comment Form is loading comments...