President of the Guild of Nollywood Cinematographers, Afam Chiazor Dies While Shooting A Movie In Abeokuta(Photos) 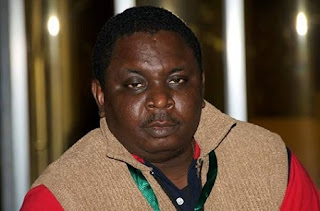 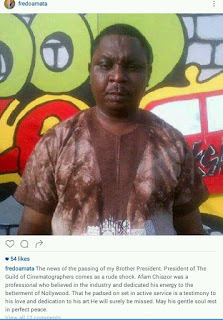 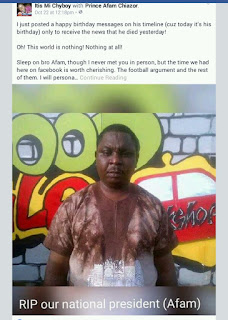 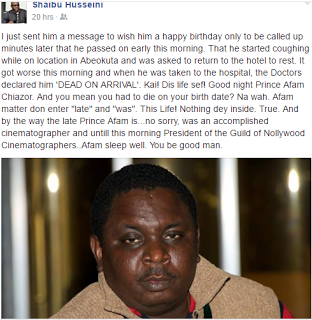 The President of the Guild of Nollywood Cinematographers, Afam Chiazor died on Friday, October 21 after brief illness. According to the information gathered, he died while shooting a movie in Abeokuta, Ogun State. He started coughing suddenly while working, and was taken back to the hotel, but the situation got serious and he was rushed to the hospital, where he was eventually confirmed dead.


Top entertainment journalist, Shaibu Husseini, who announced his death on Facebook stated, "I just sent him a message to wish him a happy birthday only to be called up minutes later that he passed on early this morning. That he started coughing while on location in Abeokuta and was asked to return to the hotel to rest.
"It got worse this morning and when he was taken to the hospital, the Doctors declared him 'DEAD ON ARRIVAL'. Kai! Dis life sef! Good night Prince Afam Chiazor. And you mean you had to die on your birth date? Na wah. Afam matter don enter "late" and "was".
"This Life! Nothing dey inside. True. And by the way the late Prince Afam is...no sorry, was an accomplished cinematographer and untill this morning President of the Guild of Nollywood Cinematographers..Afam sleep well. You be good man," he stated.
Also confirming his death,Itis Mi Chyboy wrote...


'I just posted a happy birthday messages on his timeline (cuz today it's his birthday) only to receive the news that he died yesterday!
Oh! This world is nothing! Nothing at all!


Sleep on bro Afam, though I never met you in person, but the time we had here on facebook is worth cherishing. The football argument and the rest of them. I will personally miss you!
Adieu'
Fred Amata wrote.....
'The news of the passing of my Brother President. President of The Guild of Cinematographers comes as a rude shock. Afam Chiazor was a professional who believed in the industry and dedicated his energy to the betterment of Nollywood. That he padsed on set in active service is a testimony to his love and dedication to his art.He will surely be missed. May his gentle soul rest in perfect peace'.
Loading...
">