Minister and Akor before their resignations were Senior Special Assistants to the state governor on New Media and Women Affairs.

In his resignation letter, Minister had stated that he bowed out for personal reasons.

Meanwhile, Dino Melaye who will be slugging it out with Yahaya Bello's Senatorial Candidate for Kogi West, Smart Adeyemi in the forthcoming general elections took to social media in his usual manner to mock Gov. Yahaya Bello.

Dino posted his pictures with Minister and Akor on his instagram page, welcoming the duo "back home."

Nihi fell out with the New Direction government and  resigned as the State Chairman, National Youth Council of Nigeria, following the government's refusal to support his aspiration for the National Headquarters of NYCN. 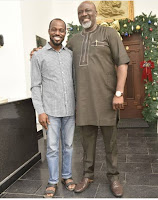 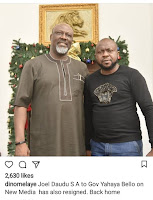