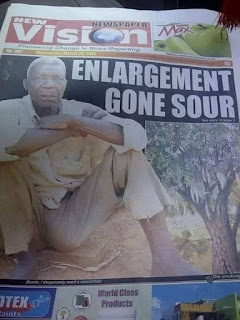 An 82 year old man is paralyzed from the waist to his ankles following a botched attempt to enlarge his manhood & improve his libido.Gibson Banda who lives in Lusaka can hardly move other than drag himself in a sitting position with the help of his hands.

The man who is Banda of Malawian descent was forced to take the herbs as he wanted to be satisfying his 35 year old wife who has been complaining about the size of the  "thing" Mr Banda was presenting to her. But after taking the medicine in overdose, Mr Banda's item became 5 times bigger and he got paralyzed and his wife left him"