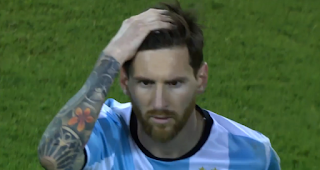 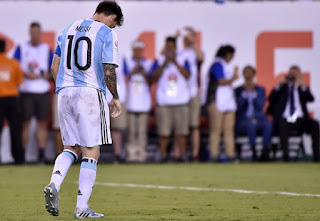 Lionel Messi has stunned the footballing world by announcing that he is quitting international football following Argentina's penalty shootout loss to Chile in the Copa America final.


The 29-year-old missed his spot-kick in the shootout as Argentina lost their third major final in three years, following last year's Copa America final and the 2014 World Cup final.
"It's tough, it's not the time for analysis," Messi said. "In the dressing room I thought that this is the end for me with the national team, it's not for me.
"That's the way I feel right now, it's a huge sadness once again and I missed the penalty that was so important.
"I tried so hard to be champion with Argentina. But it didn't happen. I couldn't do it."
Sergio Aguero, Messi's best friend on the team, said he had never seen the mood in the dressing room so low, while Manchester United goalkeeper Sergio Romero is hopeful that Messi may rethink his decision.
"I think Leo spoke in the heat of the moment because we missed that great chance," said Romero.
The Copa American final in New Jersey was the Barcelona star's 112th appearance for his country.
Messi scored five goals in the tournament, but blasted his penalty over the bar after the game finished 0-0 after 120 minutes.