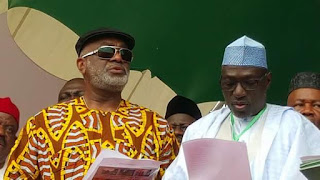 The attention of the Care-Taker Committee of the Peoples' Democratic Party has been drawn to press statement issued by Senator Ali Modu Sheriff and professor Wale Oladipo purporting to suspend the Edo State Executive Committee of the Party.

The general public, in particular leadership and members of the PDP in Edo State are advised to ignore the statement as it is completely with neither basis nor authority. Procedures for taking such far reaching decisions are prescribed in the constitution of the party, so is the organs so empowered to take it.

It is no longer news that the Ali Modu Sheriff led National Working Committee and indeed all national officers were removed by the Party's Convention, which is the highest decision making organ of the Party. Senator Sheriff and his cohorts therefore lack the locus to take any decision on behalf of the Party.

This purported suspension is clearly part of the desperation of Senator Sheriff and his paymasters to orchestrate confusion that would lead to the failure of the Party in the forthcoming gubernatorial election in Edo State; an election that the Party is otherwise very well placed to win.

The Care-Taker Committee recognizes, and would continue to relate with the leadership of the Party in Edo State that was validly elected at the recent Congresses, even as it calls on the members and teeming supporters of the Party in the state to remain steadfast and vigilant in the face of the mischief being perpetrated by Sheriff in order to destroy the Party.

The Care-Taker Committee also appeals to the Nigeria Police, the Department of State Services and indeed all security agencies to call Sheriff to order as well as keep more than an eye on him, so that he doesn't precipitate crisis in any part of the country, for which he is well known, since we, as Nigerians already have enough on our hands to contend with.