Cossy Orjiakor Replies Kemi Olunloyo:'You Are Educated But Not Enlightened'.Kemi Olunloyo Fires Back At Her(Pics)

Nollywood actor Cossy Orjiakor has lashed out at Kemi Olunloyo for saying she is at risk of getting cancer because of her big bo*bs.According to Cossy,Kemi is educated but not enlightened.She wrote......

'Just came across this.some educated people are not really enlightened. Cancer is no respecter of boobs size.and I believe that fungi is one of the culprits . So I. Cossy Ojiako. And my big boobs friends and any volunteer doctor that can press or squeeze our breast to teach us how to self examine is welcome. Starting from October next yr.#breast #cancer #awareness  am also passionate about human pap. Virus the one that causes skin tags and unsightly warts. Hopefully I will be able to  pay for vacination and also suggest herbal remedies that may come handy.I will also educate the public on benefits of having  a normal ph alkaline body.  And encourage people to.just cut garlic into 2 then swallow, no need chewing it. Even bitter leave water.. And d rest.Gods willing October next year I will start touching peoples life's. Will also be giving free car make over to any cancer survivor...or any one that fights this course with me.hahha pink cars is  a sign of support and fight against cancer.#cossyojiakor #foundation #launching #October #2017'

Reacting to Cossy's claim that she is not enlightened,Kemi said....

'COSSY ORJIAKOR CALLS ME EDUCATED BUT NOT ENLIGHTENED. Here's my reply for all that #BimboTalk

So glad I finally empowered you Cossy. Thanks for calling me educated but I'm more enlightened than you. You should have known these things a long time instead of flashing boobs all over the clubs to these young horny dickheads. Why wait till October next year aka #BreastCancer awareness month. Its not a show Cossy dear. Its a year round campaign on #HNNHealth Every 11th day of the month Cossy. Google my name and see my bra pics and education videos. Its MONTHLY NOT JUST ANNUALLY girl. 95% of females supporting you attacking me at instablog9ja have never had a yearly mammogram. We had 19 women die here in UCH Ibadan already in 2016. Start with your village. Illiterates first. They know nothing about it.  #RIPBolaDavies Deputy Editor City People (October 2016) and #RIPMojisolaOgunsanya (March 2014) Wife of Multichoice CEO Dewunmi Ogunsanya. These were two of my best friends who both died at 49yo. They did not see their 50th birthday and money plus status means nothing. Thanks for calling me educated and not enlightened. I am more enlightened than u. Google Susan G. Komen Foundation who I volunteer for in the USA 7mos a year and Betty Akeredolu Breast Cancer Foundation of Nigeria who I interviewed on my Ibadan TV show in 2014. Betty is the lovely wife of my lawyer who is incoming First Lady of Ondo state. She's a survivor and pls thank me Cossy for not joining the bandwagon of fakeass Nigerians that call ur boobs implants. Remember your boyfriend in Canada, he told me. I remember when both if y'all were so passionately in love when u visited while I was there. Kudos Cossy on all this sudden health education. You know the saying."If Kemi Olunloyo notices you, you are IMPORTANT." #MadamKOO' 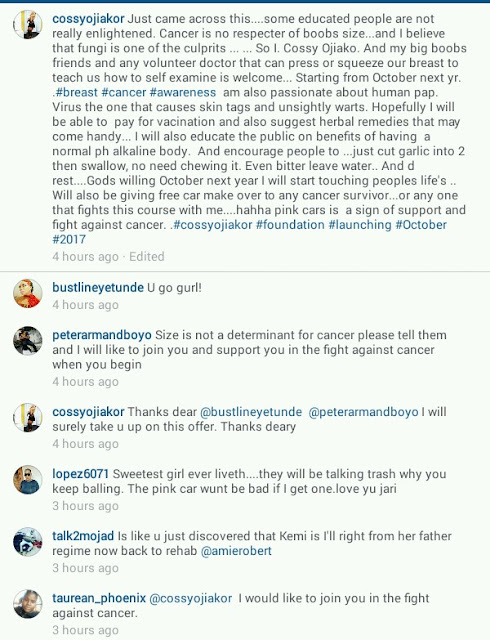 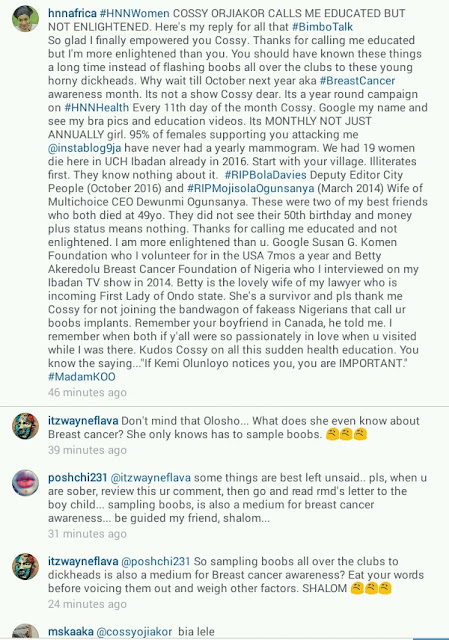 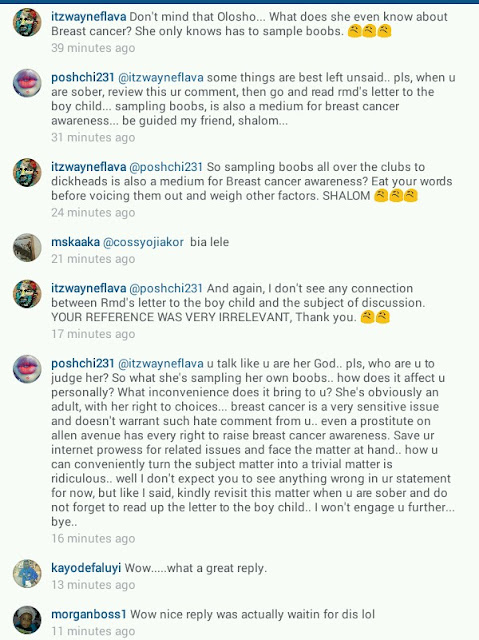 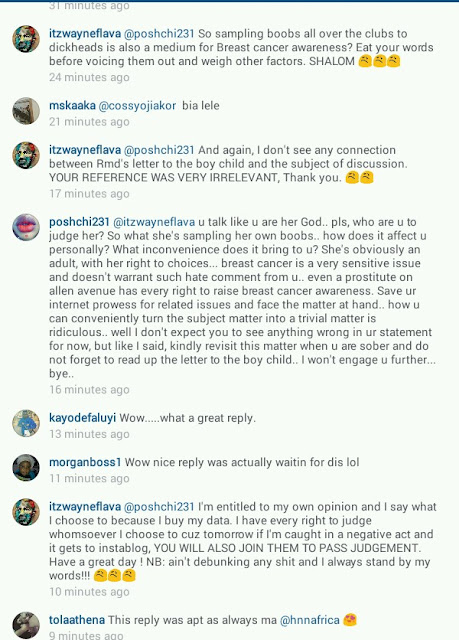